The Miss Venezuela in the year 2000, a golden era in the most important beauty pageant in Latin America, represented by a young woman of 17 years call Eva Ekvall, Venezuelan model daughter of parents Swedish – American and mother in Jamaica.

Representing the Apure State would be unveiled this talent where he won the coveted crown to go to Miss Universe in Puerto Rico taking the crown of 4ta finalist in the important contest.

Subsequently Eva, decides to venture into the world of art being a presenter in television programs and in the newscast Televen where he served as the main anchor and broadcaster; to be immersed in the world of communication knows who would be her husband and love of life: John Fabio Bermúdez in the year 2007. Two years after is born the offshoot of this love Call Light Miranda Bermúdez Ekvall

In 2010 Ekvall is diagnosed with breast cancer, according to its own statements was quite repentant not to take action on the matter, since it was already too late to be advised by your doctor that you had a cancer quite advanced: «At that time I was tears in his eyes and I thought in my family, in the injustice of the matter, in the desire that had to shout and, above all, in my ignorance unjustifiable. I have no excuse, i due checked before, I have months viéndome a cancer giant in the teta and I never realized. Stupid, stupid stupid,» wrote for the magazine Cromos.

Decided to document their process by pictures next to a recognized expert in the field Roberto Mata, for inclusion in the post office where he reported to his family his state of health and finally led to a book that published at the end of 2010 entitled: out of focus.

With a sense of humor quite peculiar, former Miss faced their disease despite the astonishment of colleagues and relatives by the disease that leads to more than half a million women a year; so it was by an example a tweet that published after shaving the head: «I know what it feels like to have neither a hair of dumb» and others such as: «I must say that the look Sinead O’Connor i looks great, the modesty left in the operating room». He explained.

For her humor is the weapon to distract their loved ones in this difficult disease: «I like to see things with a sense of humor, but it is not so easy, although the truth I think that helped more to my surroundings, at times uncomfortable or pain I blew a joke for them to know that they should not be wrong with me».

After having a great recovery, give many interviews in national and international programs, be image of campaigns against breast cancer is believed had a relapse and died on 17 December in Houston, Texas, USA, home of the cancer that was diagnosed in February 2010 and was presumed was completely cured.

A woman who had a short life but gave a very powerful message not only to women but also to men also: cancer is curable if detected in time; unfortunately took a girl more, with a whole life ahead, very sure of itself, where always stressed feel capable of coping with all their problems by conviction own; but as said a famous Venezuelan writer: «cancer had the last word…».

History of a miss: Stefanía Fernández 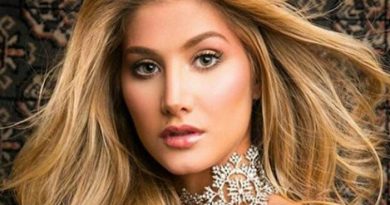 History of a miss: Mariangel Ruiz